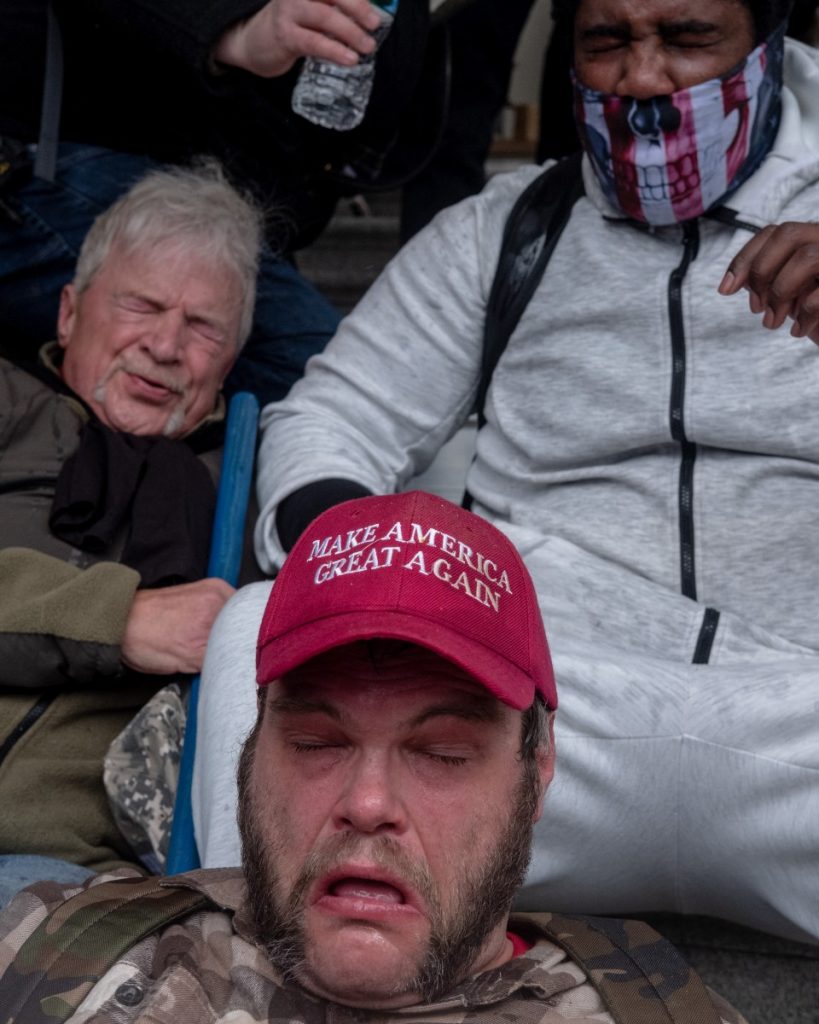 Above: The 2021 Attack on the U.S. Capitol represents just one of several extremist occurrences within the past seven years.
Photo: Chris Jones (100 Days in Appalachia)

Below: Dylan Roof’s motivations for murder, criteria for target suitability, and knowledge of potential impact and technique came about from his associations.
Video: KPRC 2 Click2Houston (YouTube)

Domestic extremism has risen in the United States since 2014, with an increasing number of terrorist incidents stemming from far-right attacks and plots (Jones, Doxsee, and Harrington 2020). High profile incidents of such extremism include Dylann Roof’s attack on the Emmanuel AME Church in Charleston, South Carolina (Alcindor and Stanglin 2015),  the violence at the “Unite the Right Rally” in Charlottesville, Virginia (Al Jazeera News 2017), and the 2021 storming of the United States Capitol (Leatherby and Singhvi 2021) Accordingly, scholars use a variety of theoretical frameworks to explain far-right extremism including group threat (Rydgren and Ruth 2013), routine activity theory (Costello et al. 2016), and grounded theory (Windisch et al. 2018). However, I argue that a social learning approach, specifically Sutherland’s Differential Association Theory, marks a particularly promising avenue for explaining this rise.

To begin, Sutherland’s (1947) original Differential Association Theory (or DAT) posits that individuals learn criminal behavior, an education which includes “(a) techniques of committing the crime, which are sometimes very complicated, sometimes very simple [and] (b) the specific direction of motives, drives, rationalizations, and attitudes” (p. 9). Likewise, individuals commit crime “…because of an excess of definitions favorable to violation of law over definitions unfavorable to violation of law” (Sutherland 1947:9). Said definitions, or attitudes towards legality, vary considerably and emerge from the personal relationships which individuals form throughout their lives. In other words, if one associates with those who treat legal elements as unfavorable, one is more likely to learn how and why to engage in illegal activities.

Differential Association Theory differs from other criminological theories in that it attributes criminal behavior not to psychological traits, biological traits, nor economic inequalities, but rather to the “balance of criminal versus conforming differential associations, or, in other words, of the balance of exposure to criminal versus conforming social settings and definitions” (Pauwels and Schils 2016:3). As the theory postulates, “[w]hile criminal behavior is an expression of general needs and values, it is not explained by those…,since noncriminal behavior is an expression of the same needs and values” (Sutherland 1947:10).  As Shoemaker (2018b) puts it, “[t]heft and honest labor both have the same goal—making money to obtain some measure of happiness and satisfaction in life…the means, however, are different” (p. 185).

Likewise, Burgess and Akers’ (1966) differential reinforcement concept modifies Differential Association Theory by noting that individuals learn criminal behavior not only from personal associations but from “both nonsocial situations that are reinforcing or discriminative and through that social interaction in which the behavior of other persons is reinforcing or discriminative for criminal behavior” (p. 146). In other words, differential reinforcement allows Differential Association Theory to engage with an account for elements beyond explicit interpersonal dynamics such as environmental concerns.

In this context, online extremist networks operate as a source of differential association. As Hawdon (2012) explains:

Those involved in these groups interact with others like them, thereby creating and recreating, affirming and reaffirming, a culture of hate. Their discourse…disseminates the definitions favorable to violence. They teach each other and learn from each other; they reward each other for espousing violence; they glorify past violent acts and actors (p. 44).

McNamee, Peterson, and Peña (2010) also note that the messages in these discourses tend to promote education through reinterpreting history, promote association with the group via messages of “waging battle”, invoke some element of distinction for the group such as superiority, and indict some external group.

The Charleston Church Massacre as a Case Study

Considering the example of the 2015 Charleston Church Massacre, Differential Association Theory can explain the event as follows: Dylann Roof, by his own admission, encountered extremist definitions following the murder of Trayvon Martin by reading online discussions from the Council of Conservative Citizens, a white supremacist organization (O’Connor 2015). From there, Roof began to form deeper associations to white supremacist networks, adopting definitions favorable to white supremacy, racist iconography such as the Rhodesian and Confederate Battle flags, and violence towards African-Americans (Robles, Horowitz, and Dewan 2015). Roof would also integrate white supremacist talking points, in particular the Fourteen Words and the idea of protecting white women, invoking the idea as necessitating his massacre (Ellis, Perez, and Ford 2015; Michael 2009). Likewise, Roof’s integrated definitions favorable to criminal extremism began to outweigh any definitions he had favorable to legal conformity.

While Roof already had a previous relationship with weapons (see Ross 2015), he learned from his associations that he had to take action to “save” the white people in America and that it wasn’t “too late for America…” (O’Connor 2015). He also learned, most likely from the same associations, that he ought to engage in battle and “have the bravery to take it to the real world” (O’Connor 2015). Likewise, Roof also likely learned that certain targets would be more suitable, leading him to plan his attack against the Emmanuel AME Church for its roots in African American history (Alcindor and Stanglin 2015).

In short, Roof’s differential associations between online white supremacist networks, presumably beginning with the Council of Conservative Citizens taught him that using a gun to attack African Americans, or the technique of committing the crime, would prove effective. Likewise, these associations also directed Roof’s motives, drives, rationalizations, and attitudes towards both African Americans and laws against violence. The net effect of this education was that Roof entered the Emmanuel AME church, spent an hour with parishioners, and then opened fire on them, killing nine. When one parishioner pleaded with him to stop, he responded, “No, you’ve raped our women, and our taking over the country…I have to do what I have to do” (Ellis et al. 2015).

To clarify, Differential Association Theory’s strength in explaining far-right extremism rests in its ability to mesh institutional factors such as the role of cyberspace and ideology with both individual and group level factors such as learned techniques and behaviors, creating a neat model that moves from one level to another with little difficulty. Furthermore, evidence demonstrating increased extremist operations and messaging permeating cyberspace lends empirical strength to the theory’s explanatory power (Benton and Peterka-Benton 2020; Hawdon 2012; Weimann and Masri 2020; Youngblood 2020) as well as its central concepts: definitions, associations, and behavior.

To illustrate the theoretical challenges, Lafree, Jensen, James, and Safer-Licthenstein (2018) find that associations with radical peers to be a significant, indeed their strongest recorded predictor of engaging in or intending to commit acts of political violence. While such evidence suggests that extremism rights might be attributed towards increased associations with radicalized peers, a suggestion consistent with Differential Association Theory, the suggestion also highlights two key issues with the theory.

First, differential association alone does not adequately explain the origin of the ideas and behaviors that transmit between associations. In other words, if someone learns extremism from their peers, where then did their peers learn it from? Plainly, Differential Association Theory presents difficulties in attempting “to go beyond an individual case and reach generalizations regarding a class of overt behaviors…” (Sutherland 1944:38). However, integration with other social theories might reasonably address this issue, with Hagan et al.’s (1999) concept of hierarchic self-interest providing a particularly interesting rationale for extremist behavior’s origin.

Second, differential association presents a time-order issue with extremism. Put another way, do people engage in extremist behavior because of extremist associations, or do they form extremist associations because of their extremist behavior? While findings strongly suggest that differential associations constitute a critical element for extremism (e.g. Lafree et al. 2018), such findings are typically based on cross-sectional data, prohibiting causal ordering (e.g Pauwels and Schils 2016). Likewise, findings also offer mixed support on whether it is truly associations alone affecting extremism or whether there might be some moderating variable (see Becker 2019 for an example).

Additionally, relating Differential Association Theory to extremism also presents several empirical challenges. First, Differential Association Theory posits that extremism is learned like any other behavior and as such, the required associations “may vary in frequency, duration, priority, and intensity”(Sutherland 1947:9). Yet as Lafree et al. (2018) note, “in most studies, scholars take exposure to extremist beliefs as the starting point of radicalization. Likewise, while Becker (2019) finds association with informal street gangs, organized criminal gangs, or both results in a higher probability of violent extremist behavior, extremist group membership only holds a marginally positive relationship to the same behavior. Furthermore, Becker’s (2019) measure of whether individuals are actively recruited into an extremist movement, which he refers to as perhaps his most direct approximation of a differential association process actually loses significance in a multivariate model. However, these shortcomings might reflect differences among steps in the differential association process rather than total mediation.

To conclude, Differential Association Theory holds promise for explaining the recent rise in extremism as a consequence of increased exposure, and resulting increased association with extremist material, ideas, and peers. Conceptually, the theory posits a necessary condition for extremist violence and allows for neat empirical testing. However, necessary doesn’t necessarily equate with sufficient, and as a result, Differential Association Theory functions best when integrated with other theoretical elements (see Lafree et al. 2018). Such integration also allows scholars to address the theoretical challenges a differential association approach presents, namely addressing extremism’s origins and the time order between initial exposure and engagement in extremist violence. Still, the task remains for scholars to further develop the empirical grounding for the extremist learning process, necessitating moving beyond the typical assumed relationship and cross-sectional approach typical of the contemporary literature.

Leatherby, Lauren, and Anjali Singhvi. 2021. “How Trump’s Calls to G.O.P Lawmakers Fit in the Timeline of the Capitol Riot.” The New York Times, February 13.

Sutherland, Edwin H. 1947. “A Statement of the Theory.” Pp. 7–12 in On Analyzing Crime, edited by K. Schuessler. Chicago, IL: University of Chicago Press.